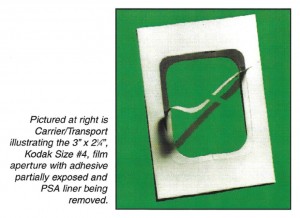 The new FilmTran™ Small Size X-Ray Film Carrier/Transport for Veterinary Medicine Is designed to transport small size X-ray film through a larger processor , and then be Used as a viewing card. The Carrier/Transport will save the expense of purchasing and Operating two separate processors.

The card is constructed of a sheet of developer chemical and roller resistant material with Single or multiple windows cut into it to receive smaller size X-ray film used in veterinary Medicine.

The Carrier/Transport is also available in clear polyester with a clear adhesive to use only As an existing X-ray film viewing card that allows a view of the entire X-ray.

The windows have a protected pressure sensitive frame which, when the adhesive is Exposed, allows the film to be securely attached. The frame is protected by a PSA liner Which is slit for easy removal, even in the darkroom.

FilmTran™ Film Carrier/Transport for Veterinary Medicine is available at a very low cost And is effective for use in virtually any size film processor.

Because of its construction , the Carrier/Transport is developer Chemical and roller resistant. It can Be used in virtually any size film Processor, thereby saving the cost of Purchasing and maintaining two Different processors., one for the Large film and another for small film.

For viewing purposed only, FilmTran Also makes a carrier constructed with A clear window and clear adhesive to Allow viewing of the complete X-ray, With no opaque edges that might Obscure the outer perimeters of the Film. The card is imprinted with Spaces for writing pertinent Information such as I.D. numbers Doctors or patients name.

How to use the FilmTran™, X-Ray Film Carrier.
After the film has been exposed.

1.Remove all wrappers, if any (in the darkroom)
2.Remove the protective liner from around the window to expose the adhesive
3.Place film onto the window frame then press and glide gently, but firmly, with the thumb around the frame to insure good contact to the adhesive. You may use a hand roller and pad part No. RP1 or you may feed it through a pressure roller device (Bisco Film-Set) before sending through the processor.
4.Feed through the film processor.
5.Use Carrier/Transport with film for viewing just as it comes out of the processor.